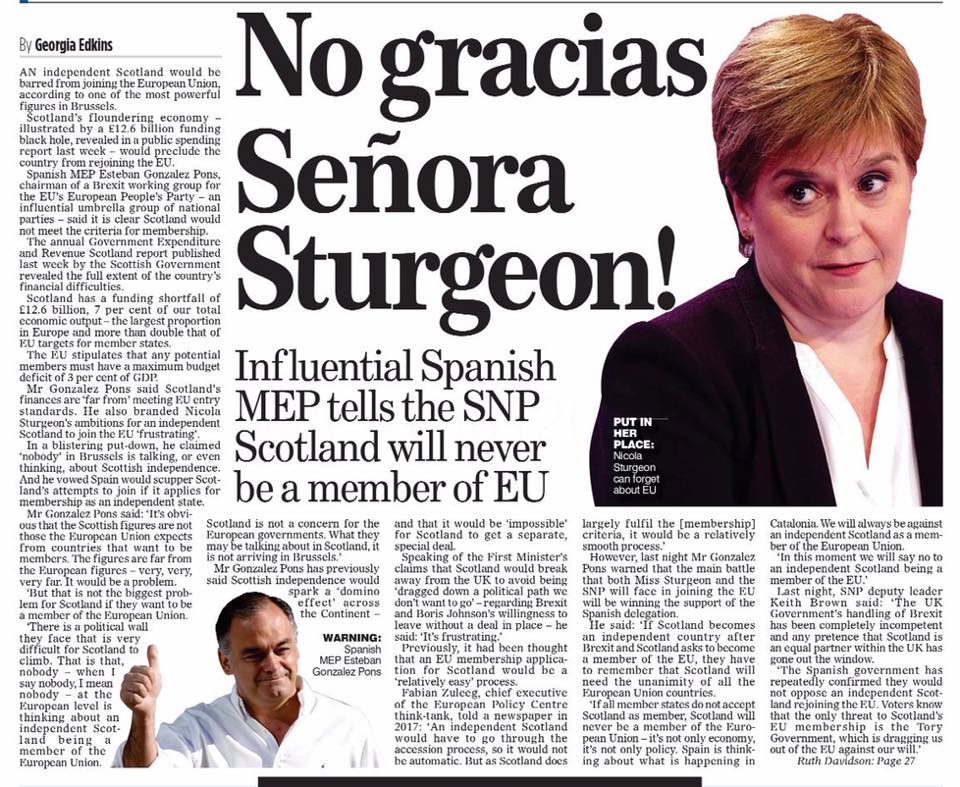 Nicola Sturgeon can forget about EU PUT IN HER PLACE:
AN independent Scotland would be barred from joining the European Union, according to one of the most powerful figures in Brussels.

Scotland’s floundering economy – illustrated by a £12.6 billion funding black hole, revealed in a public spending report last week – would preclude the country from rejoining the EU.

Spanish MEP Esteban Gonzalez Pons, chairman of a Brexit working group for the EU’s European People’s Party – an influential umbrella group of national parties – said it is clear Scotland would not meet the criteria for membership.

Scotland has a funding shortfall of £12.6 billion, 7 per cent of our total economic output – the largest proportion in Europe and more than double that of EU targets for member states.

The EU stipulates that any potential members must have a maximum budget deficit of 3 per cent of GDP.

In a blistering put-down, he claimed ‘nobody’ in Brussels is talking, or even thinking, about Scottish independence. And he vowed Spain would scupper Scotland’s attempts to join if it applies for membership as an independent state.

Mr Gonzalez Pons said: ‘It’s obvious that the Scottish figures are not those the European Union expects from countries that want to be members. The figures are far from the European figures – very, very, very far. It would be a problem.

‘But that is not the biggest problem for Scotland if they want to be a member of the European Union.

‘There is a political wall they face that is very difficult for Scotland to climb. That is that, nobody – when I say nobody, I mean nobody – at the European level is thinking about an independent Scotland being a member of the European Union. Scotland is not a concern for the European governments. What they may be talking about in Scotland, it is not arriving in Brussels.’ Mr Gonzalez Pons has previously said Scottish independence would spark a ‘domino effect’ across the Continent – and that it would be ‘impossible’ for Scotland to get a separate, special deal.

Speaking of the First Minister’s claims that Scotland would break away from the UK to avoid being ‘dragged down a political path we don’t want to go’ – regarding Brexit and Boris Johnson’s willingness to leave without a deal in place – he said: ‘It’s frustrating.’

Previously, it had been thought that an EU membership application for Scotland would be a ‘relatively easy’ process.

Fabian Zuleeg, chief executive of the European Policy Centre think-tank, told a newspaper in 2017: ‘An independent Scotland would have to go through the accession process, so it would not be automatic. But as Scotland does largely fulfil the [membership] criteria, it would be a relatively smooth process.’

However, last night Mr Gonzalez Pons warned that the main battle that both Miss Sturgeon and the SNP will face in joining the EU will be winning the support of the Spanish delegation.

He said: ‘If Scotland becomes an independent country after Brexit and Scotland asks to become a member of the EU, they have to remember that Scotland will need the unanimity of all the European Union countries.

‘In this moment we will say no to an independent Scotland being a member of the EU.’

Last night, SNP deputy leader Keith Brown said: ‘The UK Government’s handling of Brexit has been completely incompetent and any pretence that Scotland is an equal partner within the UK has gone out the window.

‘The Spanish government has repeatedly confirmed they would not oppose an independent Scotland rejoining the EU. Voters know that the only threat to Scotland’s EU membership is the Tory Government, which is dragging us out of the EU against our will.’

WHEN it emerged that – for the first time since taking office – Nicola Sturgeon was going to dodge the publication of the Scottish Government’s annual accounts, it raised a few eyebrows.

Not only would she palm-off all questions to a junior colleague, but she would be missing in action completely – getting as far from the political event of the day as possible, by disappearing off to Shetland. Just what was going on?

Well, as Alex Salmond said when he was in the hot seat a few years ago: ‘The figures are in, the jury is in, these are the GERS (Government Expenditure and Revenue Scotland) figures and there is no dispute about that.’

But that was in the days when the SNP pointed to GERS to show how well Scotland was doing compared with the UK. After several more years of SNP mismanagement of the Scottish economy, the picture is somewhat different.

It’s clear why Nicola Sturgeon body-swerved this hugely important day in the political calendar – the figures were horrific, and much worse than anybody expected.

Scotland has an enormous black hole in her finances – more than £12 billion – and is running a deficit of 7 per cent.

To put that in context, the next worst performing country in Europe is Cyprus, whose deficit is 4.5 per cent. The deficit of the UK as a whole is just 1.1 per cent.

So, what does that mean? It means Scotland’s deficit is nearly seven times that of the whole UK.

It means that – because we pool and share our resources across the whole of Britain – Scots are around £2,000 better off in terms of tax and spend than we would be on our own. And it also means that the Nationalists’ economic case for independence lies in tatters.

To bring that deficit down to a level where an independent Scotland would even be eligible to join the EU – as Nicola Sturgeon says she wants – would require vicious tax hikes or swingeing cuts to public services, the likes of which have never been seen in this country in my lifetime.

It rounds off a tough week for the Nationalists. The Electoral Commission, independent arbiter of elections and referendums, told the Scottish parliament that any second independence referendum would need to have its question assessed and approved.

The SNP wants the same Yes/No format as last time, but the Commission ruled that out for the Brexit referendum, which is why that poll question was ‘Leave’ or ‘Remain’. Its assessment was that any question asking ‘Yes’ or ‘No’ unfairly benefits the ‘Yes’ side. More than that, the Commission recommended a gap of at least nine months between passing the legislation for a vote and polling day.

NICOLA Sturgeon wants an independence referendum in the second half of next year – although she has not yet done anything concrete, such as request the Section 30 powers required from the UK Government, to make this happen.

The general Referendums Bill going through parliament isn’t due to finish its passage until Christmas at the earliest and there would need to be legislation passed after that about specifics like the date, questions and length of campaign.

The First Minister likes to put on a show about the inevitability of Scottish independence. She pretends that all she needs to do is click her fingers for another referendum to happen, and claims that her side would win at a canter.

But she has not yet pushed the button and requested the transfer of powers in order to make one happen. Why?

Last time, her side got to pick the date, pick the question and had economic data (including fantasy oil figures) that they could spin just about plausibly enough to persuade people that everything would be all right. Even with these advantages, they lost by 11 points.

Now the Electoral Commission is restricting her ability to make a rerun on her terms, and her dreadful handling of Scotland’s economy is coming back to bite her.

After whipping her supporters up to fever pitch with promises of a referendum just over the next hill, she is stalling on trying to make it happen. No wonder she chose to slope off to Shetland instead of face the music.
Source: Scottish Mail On Sunday


What more needs to be said? The SNP are selling Scotland a pup. EU membership would be extremely difficult, if at all possible.

Its certainly not “We have whisky, oil, and fish” and waltz straight in the door for the mythical “seat at the top table”