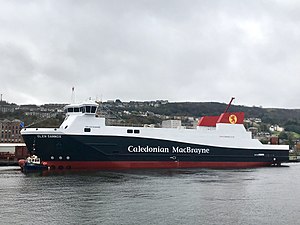 Derek Mackay allegedly called the board of CMAL “bastards”

A row between a Scottish tycoon and the SNP boiled over last night with claims that finance secretary Derek Mackay had a foul-mouthed outburst about the executives of a government-owned ferry operator.

The engineering billionaire Jim McColl said Mackay disparaged the board of Caledonian Maritime Assets (CMAL) as “bastards” while tension grew over the £97m construction of two ferries.

McColl said the blame rested with CMAL and he recalled a conversation with Mackay on June 5, 2018, in an office at the Scottish parliament.

At the time, ministers were growing anxious over spiralling costs because CMAL was insisting on design changes to the vessels.

According to McColl, Mackay had been warned that the CMAL board would resign if ministers interfered.

“I did approach Derek Mackay at the time to say, ‘You need to insist they [CMAL] take part in a process with an independent expert’ as the only way we would get this sorted out,” McColl told The Sunday Times.

“He put the [government] officials that were in the room out of the room and told me that he hated ‘these bastards’ [CMAL] and that they had sent him a legal letter threatening him that if he continued to unduly interfere with them as an independent board they would resign en masse. I said he should welcome it with open arms. He said he couldn’t because of the political backlash it would have.”

McColl’s firm went into administration earlier this year and a new team was installed at Ferguson Marine in Port Glasgow.

A report into the fiasco, unveiled by Mackay last week, laid the blame for delays and runaway costs squarely at the billionaire’s feet. It cited a lack of project management and claimed that basic design work remained incomplete after almost five years.

Mackay told MSPs that the final cost of sourcing the vessels from the last civilian shipyard on the Clyde would be double the original £97m. One is scheduled for delivery by December 2021, the other by October 2022.

McColl, 67, described the report’s findings as an “outrageous lie” and may sue the Scottish government for defamation.

The Scottish government declined to comment on McColl’s claims and has in the past denied knowledge of a letter from CMAL in which the board allegedly threatened to resign. On Friday, Kevin Hobbs, CMAL’s chief executive, also denied the existence of a letter and said McColl had “blatantly…tried to deflect the blame” of his “business failure” onto others.

However, a well-placed source said those involved in the ferries contract “were absolutely aware of CMAL board’s threat to resign if they were forced to go to arbitration”.

The source, added: “It was clear the only way to resolve the impasse was through negotiation but the Scottish government ran scared of CMAL.I don’t know why.”

The Scottish parliament’s rural economy and connectivity committee intends to investigate but McColl suggested it would be a whitewash and called for a public inquiry. “The parliamentary committee system is not about checks and balances, it’s about railroading government’s view through. Holyrood committees have a built-in government majority.”

So there you are folks. Its more important to the SNP to try and save face, than actually take action and fix problems.

We’re now stuck with ferries that are over double the original cost (and rising), and over 2 years late. Its even debatable if they will be delivered at all. They may well have to be scrapped and stared again from scratch, which will cost 10s of millions more.

(BTW, the windows on the image above are not there. They’re painted on to make the ship look nearer completion so Sturgeon didn’t look bad launching it)